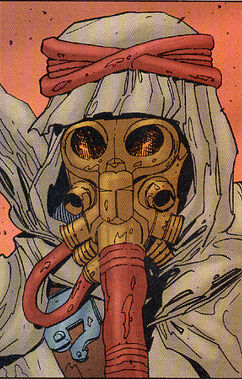 Centurion Caius Drusus is the leader of a Caesar's Legion group which has developed a fairly lucrative slave trade with the ghoul town of Reservation. He holds the rank of centurion.

He carries himself with the pomp and dignity one would expect from someone who fancies himself a centurion, while also maintaining the air of a seasoned warrior, even from under his heavy environmental suit. He is a commanding presence and is not afraid of being confrontational. He does not wield a shotgun like his soldiers, but he does carry a .45 caliber revolver which he is very capable of using.[1]

Caius will not have much to say to the Prisoner, unless the Prisoner has been to the Twin Mothers and dealt with the raiders there who have an interest in Caesar's Legion. Caius will be blunt and tell them to mind his own business unless the Prisoner knows of a viable supply of fresh slaves which he and his men can retrieve.[1]

Caius Drusus was to appear only in Van Buren, the canceled Fallout 3 by Black Isle Studios.

Retrieved from "https://fallout.fandom.com/wiki/Caius_Drusus?oldid=3419608"
Community content is available under CC-BY-SA unless otherwise noted.