“Only thing better than gettin' pissed is pickin' a fight. Am I right?”

Cait is a cage fighter and a possible companion living in the Combat Zone in 2287.

Cait was born in 2261 to a distant and abusive family of Irish1 descent. She had tried to run away from her parents twice; the first time, she was locked outside in a shed, the second time, they broke one of her legs. On her eighteenth birthday, Cait's parents sold her into slavery. For five years, she stole small sums of bottlecaps from her owners, until she had enough to buy her own freedom. In a pique of rage, she returned home to seek vengeance on her mother and father.

At some point after she left home, she began using psycho, developing an incurable addiction. Sometime later, she arrived at the Combat Zone in Boston, and was hired by owner Tommy Lonegan as a cage fighter, soon becoming a strong and ruthless fighter. In 2287, a raider gang moved into the area, which then required Cait to buy friends to make life easier, making the cage fighter mistrustful of selfless offers of kindness.

Sometime later, the Sole Survivor arrives at the Combat Zone just as Cait is winning a match and subsequently interrupts the rest of the event. After the Sole Survivor defeats the raiders in the building, Tommy discusses Cait's drug addiction and offers them Cait's contract.

Cait can be used to pick locks of any tier. To do so only guide her to the nearest lock. This will take some time, depending on the difficulty. She needs to have bobby pins in her inventory to do so.

Cait appears only in Fallout 4. 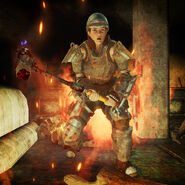 Cait's icon from the Trigger Rush perk
Add an image to this gallery
Retrieved from "https://fallout.fandom.com/wiki/Cait?oldid=2785408"
Community content is available under CC-BY-SA unless otherwise noted.