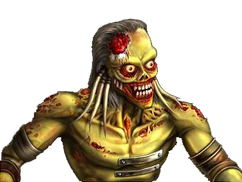 Cain is a possible player character in Fallout: Brotherhood of Steel.

As a mercenary, Cain is a ghoul through and through. Stooped, skeletal, and bony, Cain is a real badass, the kind of guy that upon finding your burning body would roast desert rat over you rather than put you out. When his home was razed to the ground by the super mutants, Cain took it personally. In an attempt to seek vengeance upon the mutants, he sought out the Brotherhood of Steel and demanded entry. As a some-what isolationist and anti-mutant order, the Brotherhood was reluctant to grant him admission, but Cain's perseverance was fueled with a grim determination. He was finally given a test of initiation, a suicide mission that should he survive would allow him to become one of the first ghouls ever to join the ranks of the Brotherhood.[1]

With less strength than Cyrus and less speed than Nadia, Cain's ability to withstand the effects of radiation is what truly sets him apart. Once he has gained the Rad Child skill, He will actually heal himself when coming in contact with Radioactive Substances.[1]

Cain appears only in Fallout: Brotherhood of Steel. 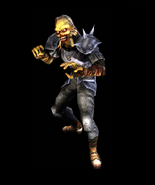 Retrieved from "https://fallout.fandom.com/wiki/Cain?oldid=3106667"
Community content is available under CC-BY-SA unless otherwise noted.