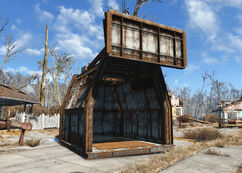 Cages are constructible items that were added to Fallout 4 by the Wasteland Workshop add-on.

Cages are divided into three sub-categories:

No matter which kind of game a cage is meant to capture, they all work the same way. Once a cage has been built, it must be supplied with power (does not count against the settlement supply, similar to indoor lighting), then left alone for some time. Sleeping in a bed or leaving the settlement will eventually result in the cage's door closing and occasional noises sounding from within. Shutting off the power or hitting the cage door with a melee attack will then open the cage and release the game trapped within.

It is not necessary to build a cage in an easy-to-access location for it to work properly. Even if the cage is completely sealed off by walls it will still capture its designated game after one to two in-game days.

Once a cage has successfully done its work and the captured game has been released, the cage itself is considered broken and must be repaired before it can be reactivated to capture another creature. A single cage can, therefore, be used to trap an infinite number of targets, provided the player has sufficient resources to repeatedly reset the trap.

While the type of creature a cage will capture is fixed, said creature's level and sub-type is not. As an example, a deathclaw cage can release anything from a basic deathclaw all the way up to a mythic one, depending on player level.

A small minority of creatures, namely cats, gorillas, and brahmin, are docile by default. The others, however, will immediately turn hostile upon their release unless a beta wave emitter has been built and activated within the settlement borders beforehand.

While caged, any type of captured non-domestic creature or enemy in a settlement will invariably lead to attacks on said outpost by other members of that species or faction, even if they don't normally attack settlements, as well as heavily increase the chances of an attack on said settlement. This can result in locations such as Spectacle Island being assaulted by entire packs of leveled deathclaws or swarms of mirelurks showing up at Hangman's Alley.

With a beta wave emitter installed and running, all captured hostile animals and creatures will refrain from attacking the Sole Survivor, their companions and any resident settlers, but will still attack tamed creatures from other species than their own and any settler assigned as an arena contestant. Any survivors will then prowl the area and defend it against outside aggressors, adding a race-specific value to the settlement's defense rating without taking up a settler slot. Keep in mind that this gets somewhat counterbalanced by the markedly increased threat of attacks due to the captured creatures themselves, as mentioned above.

This section is transcluded from Fallout 4 settlement objects. To change it, please edit the transcluded page.

yao guai cage
Add a photo to this gallery

Retrieved from "https://fallout.fandom.com/wiki/Cage_(Wasteland_Workshop)?oldid=3456488"
Community content is available under CC-BY-SA unless otherwise noted.