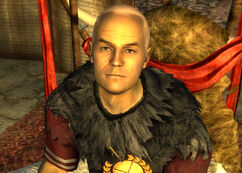 Render Unto Caesar
Wild Card: You and What Army?
The House Always Wins
Et Tumor, Brute?

“Yet we are at the throat of the Great Bear. Victory is at hand.”— Caesar

Caesar, born Edward Sallow[1], is the charismatic leader and co-founder of Caesar's Legion. He is the self-proclaimed "Son of Mars" and a former Follower of the Apocalypse and citizen of the NCR. He serves as the central antagonist in all but one storyline in Fallout: New Vegas.

Edward Sallow[1] was born in 2226[2]. His family once lived near the Boneyard until his father was killed by raiders when he was two years old, forcing his mother and him to flee[3]―eventually finding sanctuary with the Followers of the Apocalypse in 2231[2]. He received a free education from the Followers and eventually became a scribe specializing in anthropology and linguistics. While he was intelligent, and charismatic, he was never very popular among his peers, due to his narcissism and petulance. He did not feel like he belonged among the Followers and, in hindsight, considers their goals to be utterly naive[2].

In 2246[2], at the age of 20, Sallow and Calhoun, a fellow Follower, were sent east to study tribal dialects. He was instructed to meet with Joshua Graham, a Mormon missionary from New Canaan, who was a tribal specialist. They embarked on a journey to the region known formerly as Arizona as part of a nine-person expedition[2]. Disgusted by the primitive conditions in which the tribals lived, he looked down upon them as inferior and immoral. During this expedition, they also discovered a cache of books about ancient Rome. While he had known some basic facts about ancient history, these books shed new light on some of the details. Reading first The History of the Decline and Fall of the Roman Empire and then Julius Caesar's own Commentarii, personal accounts of his military conquests, changed his life and was the starting point of his grand plan. He intended to use the Commentarii as a blueprint―after all, which illiterate tribal would know that he was not the original Caesar, and his "Rome" was merely a copy of a civilization long gone[2]?

At some point in 2247[2], Sallow, Graham, and Calhoun became hostages of the Blackfoot tribe - While Caesar believed the tribe did this for ransom, Graham would later attribute the change in the tribe's relationship with the party to a mistranslation. At the time the tribe was at war with seven other tribes; they were heavily outnumbered and Sallow recognized their defeat and subsequent demise was only a matter of time. Unwilling to be destroyed along with them, Sallow chose (against the wishes of his companions) to use his knowledge to train the Blackfoot tribe in the art of warfare after witnessing their lack of knowledge first hand. He showed them how to clean and maintain guns, operate with small unit tactics, create their own explosives and to strike at their weakest enemies first; divide et impera - divide and conquer. He quickly impressed them enough to the point where he was made their leader - their "Caesar".

Caesar then introduced the tribe to the concept of total war to the tribes around them - Caesar knew that though the tribes had always fought each other via occasional skirmishes, he considered them to only be "playing at war", having never seen warfare at its most destructive and barbaric. They defeated the weakest of their enemies first and enslaved many of the able-bodied survivors; but Caesar had the rest, including women and children, killed to the last, leaving their remains piled high. When Caesar surrounded the next of the Blackfoot tribe's foes, they refused to surrender. Caesar brought an emissary of the tribe back to witness the fate of the first tribe - the tribe surrendered, rather than suffer the same fate. The concept of total war was an entirely new, and terrifying, facet to conflict that the tribes had never confronted before; such brutality would form the core of the Legion's tactics and outlook.

Surprisingly, Joshua Graham decided to join Caesar as his right-hand man, now known as the Malpais Legate. While Calhoun was sent back to the Followers to inform them of what he was doing, the other six members of the expedition were murdered on the self-proclaimed Emperor's orders. Caesar formed his Legion out of the tribes that had either been conquered or had chosen to capitulate to avoid total destruction. Caesar chose the concept of the Roman Empire to model the Legion after because of its parallels to what he considered the "status-quo" of the post-apocalyptic world - he believed the concept of individualism to have no place facing the challenges of the post-apocalyptic wasteland. Ideologically, the Roman Empire was also appealing to him for its ability to assimilate those it conquered, the destruction of such "tribal" identities a key goal to the Legion's long-term strategy of unification. He intended to erase their individual identities and replace them all with a single, monolithic culture - the Legion - where individuals have no value outside of what they offer the greater whole.

By 2250, Caesar declared himself the son of Mars, Roman god of war, and five years later he established his first capital in the ruins of Flagstaff[2]. By 2274[2], he had conquered most of the tribes of northern Arizona, southwestern Colorado, western New Mexico and southwestern Utah, and became known as the "Conqueror of the 86 Tribes", whose Legion had never met any serious defeat until their confrontation with the NCR at the First Battle of Hoover Dam.

War with the NCR

The Republic would have the dubious distinction of being recognized by Caesar as a worthy adversary. He views his campaign against NCR as similar to that of his namesake Julius Caesar who eventually seized power for himself after crossing the river Rubicon and capturing Rome; going on to take control of the Republic after years of campaigning against the tribes of Gaul more than two thousand years earlier. Likewise, the new Caesar has campaigned against the myriad tribes of the East and will now cross the Colorado river and begin his unstoppable conquest of the West and the NCR.

After succeeding in destroying one of their major fortifications, Fort Aradesh, Legion forces under the command of the Malpais Legate marched against the NCR garrison at Hoover Dam, in an attempt to take the strategic asset and river crossing. In what became known as the First Battle of Hoover Dam, Legate Graham initially had the upper hand. Graham was able to push the NCR defenders back and lead his forces over the dam. Lead elements of the NCR, including members of the 1st Recon Battalion and NCR Rangers, executed a tactical retreat west across the dam and into Boulder City, all the while using their prowess in marksmanship to kill the Legion officers (primarily Centurions and Decanii). Graham, unable to adapt to new strategies in combat, chose to order his Legionaries to push the rangers, not knowing the NCR had booby-trapped Boulder City, laying explosives along their line of retreat, and drawing the Legion into a trap. When the Legion forces entered the city, the NCR detonated the explosives and inflicted severe casualties among the Legion forces, crippling their offensive. The NCR forces then counter-attacked, pushing back and eventually routing the Legion forces who fled back east over the Dam. Caesar, angered at the failure of his Legate, made an example of him. The Praetorian Guard covered Joshua Graham in pitch, set him on fire, and cast him into the Grand Canyon.

Aside from military defeat, Caesar's greatest fear is being exposed as a fraud. Most members of the Legion, excluding some of the most trusted ones, are oblivious to the fact that the Legion's culture is based on books about ancient Rome - they believe that all of the customs enforced by Caesar were dictated to him by Mars himself. Those who claim otherwise are viewed as ultimate blasphemers. While some of the newly captured slaves are skeptical, they don't tend to be vocal about it, and their children are taken away from their parents to be raised by Caesar's priestesses[2]. Secretly, Caesar still doesn't feel like a real Emperor of Rome - with his loose nation of savages, he still thinks of himself as merely a barbaric king of the Gauls[2]. By seizing New Vegas Caesar felt that he would finally be able to elevate his Legion into a legitimate nation by giving it its own "Rome" - transforming them from a nomadic army into a true empire; a militaristic, patriarchal, imperialist, autocratic, culturally homogeneous empire whose ruler holds undisputed power - a "Pax Romana" which would prevent humanity from ever fracturing itself again. And in the NCR he found his Carthage[2].

He regards the NCR as only an extension of the corruption that existed during the Old World and is ultimately doomed to repeat the same mistakes. He sees in it similar attributes associated with the Roman Republic before Julius Caesar seized power; extensive bureaucracy, corruption, senatorial infighting and filled with a people driven solely by greed and personal gain. It exists as the antithesis to the Legion and as a catalyst for change that only a confrontation with it can bring; a clash he sees as an inevitable product of Hegelian dialectics. The conflict is a vital one not only for the future of his Legion strategically but also philosophically; the NCR is the first of his enemies to which he is truly ideologically opposed and the first that can truly test the strength of his Legion, as well as his philosophy.

In his view, the NCR does not have a long-term solution to the problems of the Wasteland - the bombs had reset humanity's progress and he believed the time had come to rebuild it into something new. He argues that NCR is weakened by its democracy, and that it was at its strongest when under the dominating rule of its second president - Tandi - whose popularity was such she remained leader of the NCR for most of her lifetime as the senate would never dare oppose her. He was taught to venerate her as a child and observes that she was ultimately more of a Queen than an elected official and that it is similar centralized power that a new civilization needs.

If you manage to kill Caesar the effects on the game are fairly minor, (although the Legion ending is massively changed, due to the fact Caesar is the leader of the Legion), as he no longer directly participates in military action.

Caesar appears only in Fallout: New Vegas and is mentioned in its add-on Honest Hearts, and was going to appear in Black Isle's canceled Fallout 3 Van Buren.

Caesar, flanked by his most trusted men

Rendering unto Caesar!
Add an image to this gallery

Retrieved from "https://fallout.fandom.com/wiki/Caesar?oldid=1104354"
Community content is available under CC-BY-SA unless otherwise noted.