Fallout: New Vegas
“You must enter Caesar's tent alone. Anyone else must remain outside.”— Unnamed Praetorian guard outside the tent

Caesar's tent is a location in the Mojave Wasteland in 2281. It is built upon the summit of the Fort. It serves as the battle line home of Caesar.

The tent is a combination of four individual tents facing an open-air throne room. The entrance serves as a reception area or checkpoint for the main room. Praetorian guards and Legion mongrels are posted here. To the left and right of the open area, a war room or command center for the Legion can be found, containing several tables strewn with maps, clipboards, and books.

Caesar's throne room is the largest tent section and serves as the central hub. More guards are located flanking his throne and the entrance. The area behind the throne contains Caesar's bed, an Auto-Doc Mark III, and a locked footlocker.

The tent always contains two Legion mongrels, four praetorian guards armed with ballistic fists, Lucius and Caesar himself. The other occupants depend on choices made by the Courier earlier in the game. Possible occupants include Vulpes Inculta, Arcade Gannon and a captive Benny.

If Caesar dies, his bed is no longer considered owned and can be used by the Courier. 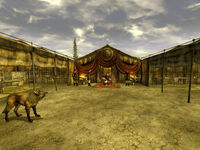 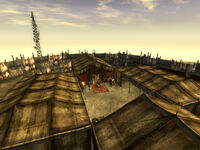 Map of Hoover Dam, on the desk to the right in the tent 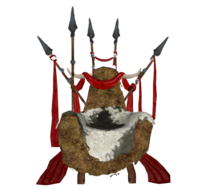