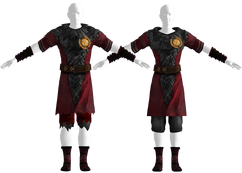 Caesar's armor is a piece of armor in Fallout: New Vegas.

It provides a Damage Threshold of 5 as well as a bonus of +5 to Survival and +5 to Speech. It can be repaired with all Caesar's Legion armor variants.

This armor will disguise the Courier as a member of Caesar's Legion, making the NCR and Brotherhood of Steel (and some other factions, depending on the status of certain quests) hostile to them, regardless of their current reputation with that faction.

The undershirt of the tunic appears to be a red sports jersey, coinciding with the football theme of Legion armor. The belt also appears to be a leather weight lifting belt.

Caesar at The Fort is wearing it. It is obtainable by killing Caesar to loot it, or reverse-pickpocketing a higher DT armor onto him, coming back later when he is wearing what was given to him, so that this armor is in his inventory and can be pick-pocketed.

Retrieved from "https://fallout.fandom.com/wiki/Caesar%27s_armor?oldid=2528911"
Community content is available under CC-BY-SA unless otherwise noted.