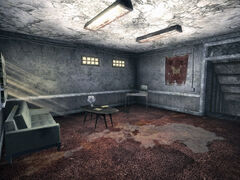 “You've proven yourself to be a true friend of the Legion. We have a safehouse available to our agents in the Mojave - here's the key. It's an excellent place to rest and store extra equipment. In addition, one of our veterans, Atticus, visits the house every few days. While he's there, you can acquire items useful for stealthy operations against our enemies from him.”— Lucius

The safehouse is used by members of the Legion operating west of the Colorado River. It is maintained by Veteran Atticus, who can be found there every 3.5 in-game days.

The key to the house is held by Lucius at the Fort, and can only be obtained from him. When speaking to him, he will offer it to the Courier if they have a "Liked" or higher reputation with the Legion. He does not carry the key in his inventory, and therefore cannot be killed or pickpocketed for it.

Outside of the building, there is a campfire. Inside, the house consists of two large rooms connected by stairs. The room downstairs has two cabinets and three footlockers, all of which can be safely used for storage. One wall of the room is lined with shelving units. There are three beds, all of which count as owned by the player character and confer the full benefits of well rested sleep. There is also a radio tuned to Radio New Vegas, and a water fountain providing clean water.

On each of the three beds, there are sets of Legion armor. One of the beds has Legion centurion armor placed on it in poor condition, allowing the Courier to receive the centurion's armor without killing a Legion member or stealing one.

If the player character develops a negative reputation with the Legion after the safehouse key is obtained, Atticus will still offer items if Legion armor is worn when speaking to him.

The Caesar's Legion safehouse appears only in Fallout: New Vegas.