Caesar's Legion operates in accordance with a strict military hierarchy, based on the Legions of ancient Rome.

Though the bulk of Caesar's soldiers have only improvised or low-tech weapons, their discipline, ferocity, and sheer numbers dampen the impact of the NCR Army's technological advantage. Combined with their skill in infiltration and sabotage, the warriors of Caesar's Legion have managed to score important victories against the NCR and maintain a powerful and feared presence in the Mojave Wasteland.

Caesar is the supreme leader of the Legion and his orders are law. Directly below Caesar is a legate, ensuring that Caesar's orders are followed faithfully. The centurions are responsible for directing the legionaries and coordinating their attacks. A contubernium consists of eight legionaries.[1]

The praetorian guards are an elite group of soldiers who operate as Caesar's personal bodyguards.[2] Though they are not part of the main fighting force, they will accompany their legate in crucial battles and occasionally serve as Caesar's executioners. The praetorians are highly respected and their leader answers to none but the legate and Caesar.

The frumentarii are legionaries trained in the arts of espionage and sabotage. Due to the clandestine nature of their work, they operate as independent units. Thus, only trusted individuals become frumentarii.

“Legionaires are the standard soldier in Caesar's Legion. Their level of experience and overall toughness can be determined by noting the color of their armor.”— Loading screen 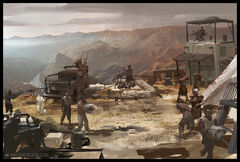 Legionaries are drawn into Caesar's service through three methods. The first method involves being born in the Legion. The second method is if a tribe is assimilated into the ranks of the Legion. The third method involves the choosing of physically fit slaves for training. Only males are allowed to serve in a military capacity. Women are forbidden from entering combat.[3]

Once the men or boys are deemed fit to serve as warriors, their training begins. The road to becoming a full-fledged legionary is fraught with hardship and underperforming recruits are threatened with death. If the trainees survive the instructors' trials, they are given the right to join the Legion's ranks. As a result, the Legion's fighters are skilled, tenacious and fearless. In comparison to the NCR's recruits, who are sometimes given as little as two weeks of combat training[4], legionaries are consummate warriors and may easily overpower NCR soldiers in hand-to-hand combat.

The recruits must now face the most dangerous time of their lives. The most inexperienced warriors in the Legion are given only crude machetes, improvised throwing spears, and antiquated firearms to battle their foes with. To make matters worse for the recruits, they are marched to the front to either overwhelm the enemy or act as human shields for the more experienced legionaries.[5]

Beyond throwing spears and utilizing whatever guns they can get their hands on, recruits must simply wade through enemy fire and hope that they survive long enough to engage their foes up close, when faced with enemies wielding firearms (such as NCR troopers and Rangers). The survival rate for a recruit is appropriately low, and due to their low tech equipment, they are generally deployed on patrols with a higher ranking legionary, or take part in small to medium-sized raids and skirmishes.

Should the recruits survive and even excel through multiple battles, they are granted the right to be promoted to prime legionaries. The prime legionaries are given better equipment and situated further away from the front lines. They are given equipment such as hunting rifles and hunting shotguns. Although all still carry a melee weapon and will use it should they get close enough to the enemy. The ability to adapt to any situation in combat by being able to switch between firearms and melee makes them excellent fighters. If they continue to demonstrate aptitude in battle, they gain the status of veterans. The veterans boast the thickest armor of the common legionaries and are kept even further away from the front lines, only being deployed if the ranks before them should fail their mission. This method of organization is not out of kindness to the Legion's seasoned warriors; it allows the Legion to hold its best soldiers in reserve so they may be unleashed if the lesser legionaries fail to defeat their foes.

If legionaries demonstrate aptitude in essential crafts, they will be assigned to such duties. These jobs can range from training the Legion's hounds to repairing and expanding the Legion's arsenal. 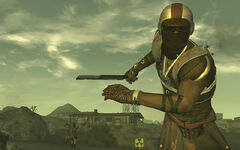 Caesar's army is highly stratified in terms of rank. A low-ranking soldier must defer to the wishes of his superiors, even if that means facing death. The Legion's success comes from the legionaries' fearlessness, cooperation, and loyalty to Caesar. Thus, cowardice and disobedience will earn the wrath of Caesar and his officers.

Advancement is primarily achieved through valorous or ingenious acts on the battlefield. A legionary who demonstrates leadership potential will be rewarded with greater responsibilities and privileges. If a legionary can earn a decisive victory for the Legion, even if it involves disobeying orders, he will be recognized for his efforts. Vulpes Inculta is a notable example, as he managed to defeat a tribe by breaking ranks and exploiting a weakness in their formation. The centurion wished to execute Vulpes for his disobedience, but Caesar elevated Vulpes to the position of frumentarii.[6]

While competence is rewarded with leadership positions, incompetence brings the threat of serious injury or death. The first legate, Joshua Graham, failed to seize Hoover Dam and his forces were routed by the NCR. Though he was the second most powerful man in the Legion and Caesar's life-long friend, Caesar nonetheless ordered his praetorians to immolate Graham and toss him into the Grand Canyon.[7] Other punishments that may be applied for failure range from crucifixion[8] to decimation.[9] Consequently, legionaries will frequently commit suicide when defeated to avoid suffering at the hands of Caesar's executioners.[citation needed]

Caesar is determined to maintain a Roman theme for his army, his underlings are equipped as such, due to his beliefs that technology makes men complacent and weak. The most common armament in the Legion are crude machetes and improvised throwing spears, but the legionaries are relatively free to use whatever weapon is available, so long as they can wield them well. As rank improves, the quality of a legionary's armament also increases. In fact, the centurions can be seen wielding weapons that are technologically advanced, ranging from thermic lances to anti-materiel rifles.

Standard legionary armor is composed of pre-War athletic gear reinforced with metal and leather and worn over versions of the traditional Roman body armor. Again, rank dictates the quality of armor. A recruit will be given armor that is ineffective against even crude bludgeons while centurions are equipped with armor that can resist knives and SMG bullets.

Due to a ban on modern medicine, alcohol, and synthetic chems, the legionaries are provided with medicines derived from the local flora and fauna. Healing powder and bitter drinks are the most common remedies used to heal wounds. In order to restore crippled limbs, the Legion uses a chem called hydra, a potent brew derived from the Mojave Wasteland's wildlife and cave fungus. Legionaries also carry antivenom as a precaution against poisoning from encounters with the venomous creatures of the desert. In addition, many legionaries carry purified water and food gathered from the wasteland for rations.

The legionaries can be divided according to experience as such: 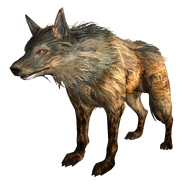 Joshua Graham, co-founder of Caesar's Legion and first Legate (once known as the "Malpais Legate" and now known as the "Burned Man") 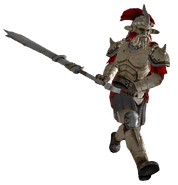 Lanius, second Legate (referred to as the "Monster of the East")

Lucius, leader of the praetorian guard

Aurelius of Phoenix, centurion in charge of Cottonwood Cove

Gaius Magnus, centurion in charge of Dry Wells, conqueror of the 87th tribe