Fallout Wiki
Register
Don't have an account?
Sign In
Advertisement
in: Caesar's Legion characters, The Fort characters, Followers of the Apocalypse characters,
and 3 more
English

Leader (Caesar) and co-founder of Caesar's Legion
King of Clubs

None
“Oh yes, raised in that tradition. And the teaching stuck. I was taught it was my responsibility to bring the torch of knowledge to the wastes.”

Caesar, born Edward Sallow, is the ruler and co-founder of Caesar's Legion in 2281. He is revered by legionaries as the self-proclaimed "Son of Mars."[Non-canon 1] He is a former member of the Followers of the Apocalypse and a former citizen of the NCR.[1][2]

Since subjugating the desolate region of the Grand Canyon beginning in 2247, he has forged his legion conquering 87 tribes, assimilated from the former Southwestern United States.[3][4][Non-canon 2]

The militaristic might Caesar's Legion achieved completely pacified the lands that the Legion occupied, but safe roads were only the first step to fully realizing a permanent Legion that could continue after his rule. The next great step was to expand westward and acquire a real "Rome" in the form of New Vegas that could be the base of his new empire. But, before they can continue westward, Caesar and his followers must deal with the New California Republic, a formidable military power that Caesar sees as his first worthy opponent.

The bedrock of Caesar's philosophy is that service to the state is not just the highest virtue, it is the only virtue. Caesar is critical of NCR society as its leaders care not for the "greater good". This is contrary to Caesar's belief that "an individual has no value beyond his utility to the state, whether as an instrument of war, or production." He views the Great War of 2077 as a chance for humanity to start over and aims to unify humanity under one banner or eliminate them should they refuse. Reading through old world books, Caesar has gained knowledge of the old glory of Imperial Rome and has used the ignorance of his followers to claim that he is Caesar, the son of Mars, the God of War, and not Edward Sallow, former Follower of the Apocalypse.

Aside from total military defeat, Caesar's greatest fear is being exposed as a fraud. Most members of the Legion, excluding some of the most trusted ones, are oblivious to the fact that the Legion's culture is based on books about ancient Rome – they believe that all of the customs enforced by Caesar were dictated to him by Mars himself. Those who claim otherwise are viewed as ultimate blasphemes and are likely to be executed. While some of the newly captured slaves are skeptical, they don't tend to be vocal about it, and their children are taken away from their parents to be raised by Caesar's priestesses.[Non-canon 3] Secretly, Caesar still doesn't feel like a real Emperor of Rome – with his loose nation of savages, he still thinks of himself as merely a barbaric king of the Gauls.[Non-canon 3] Caesar desires two things: a Carthage, and a Rome; by seizing New Vegas, Caesar felt that he would finally be able to elevate his Legion into a legitimate nation by giving it its own "Rome" by destroying the NCR, Caesar's "Carthage" – transforming them from a nomadic army into a true empire; a militaristic, imperialist, autocratic, culturally homogeneous empire whose ruler holds undisputed power - a "Pax Romana" which would prevent humanity from ever fracturing itself again.[5]

Caesar regards the NCR as only an extension of the corruption that existed during the Old World and that it is ultimately doomed to repeat the same mistakes. He sees in it similar attributes associated with the Roman Republic before Julius Caesar seized power; extensive bureaucracy, corruption, senatorial infighting and filled with a people driven solely by greed and personal gain. It exists as the antithesis to the Legion and as a catalyst for change that only a confrontation with it can bring; a clash he sees as an inevitable product of Hegelian dialectics.[6] The conflict is a vital one, not only for the future of his Legion strategically but also philosophically; the NCR is the first of his enemies to which he is truly ideologically opposed and the first that can truly test the strength of his Legion, as well as his philosophy.

In his view, the NCR does not have a long-term solution to the problems of the Wasteland - the bombs had reset humanity's progress and he believed the time had come to rebuild it into something new.[6] He argues that NCR is weakened by its democracy, and that it was at its strongest when under the dominating rule of its second president – Tandi – whose popularity was such she remained leader of the NCR for most of her life until her death as the senate would never dare oppose her. He was taught to venerate her as a child and observes that she was ultimately more of a queen than an elected official and that it is similar centralized power that a new civilization needs.[7] In the eyes of Caesar, the NCR that came after Tandi's presidency has been blighted with greed and widespread corruption because of the oligarchical control of politicians and brahmin barons looking out for only their interests instead of the greater good and its citizens. Caesar is simply quickening what is the inevitable, logical conclusion of the once virtuous NCR.[8]

Caesar also regards self-sacrifice as a necessary part of rebuilding civilization, as evidenced by the fact that he refuses the very notion of using the Securitrons hidden inside the bunker underneath his camp. Caesar rejects allowing his Legion to advance technologically, believing that life must be kept hard and filled with sacrifice in order to strengthen humanity.[9] He has similarly kept his people ignorant of mankind's former knowledge of medical science, allowing his Legion to get by on primitive healing powders while he himself keeps an Auto-Doc in his tent for both his personal use as well as a "gift" to anyone Caesar favors.[10] Similarly, drugs and alcohol are completely forbidden from being used by legionaries,[11] so most legionaries must make do with previously mentioned healing powder, bitter drink or concocting new remedies like Hydra, all with the caveat that the pain remains.

Caesar appears in Fallout: New Vegas and is mentioned in its add-ons Honest Hearts, Old World Blues, and Lonesome Road. He was going to appear in Van Buren, the canceled Fallout 3 by Black Isle Studios.[Non-canon 4]

Caesar with his most trusted men

A GECK render of Caesar

Caesar on a Legion coin (Aureus) 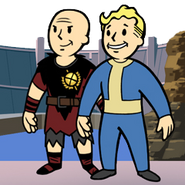 Caesar in an intro slide