Lazy morning
“Glad you finally stopped by, soldier. Are you ready for your medical exam?”

Knight-Captain Cade, registration CD-440KC,[1] is the medical officer of the Prydwen in 2287.

Cade, rank knight-captain, is stationed aboard the Prydwen as the vessel's medical officer. He is in charge of administering medical exams to new recruits of the Brotherhood of Steel. All members are required to be medically examined by the doctor annually and report for immediate decontamination after contact with outside lifeforms. He is responsible for monitoring the stability of the soldiers, as they can get mentally distraught after a long and painful mission.

The doctor was also involved in assisting Proctor Ingram with modifying a power armor frame to serve as prosthetic legs to allow her to regain full mobility.

Knight-Captain Cade appears only in Fallout 4. 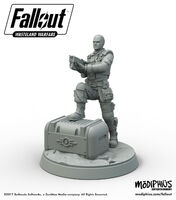