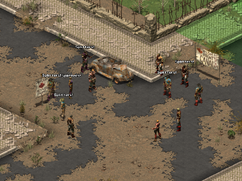 The Life of Brian

CPF vs. PFC is a special encounter in Fallout Tactics.

In this encounter, the Warrior will find two different groups of civilians - the Canadian People's Front and the People's Front of Canada - standing in a derelict complex. Both groups are arguing with one another over the future of Canada.

This encounter is a reference to a joke from the Monty Python film The Life of Brian. In the film, there are two groups fighting the Romans, the People's Front of Judea (PFJ) and the Judean People's Front (JPF).

Retrieved from "https://fallout.fandom.com/wiki/CPF_vs._PFC?oldid=2796292"
Community content is available under CC-BY-SA unless otherwise noted.