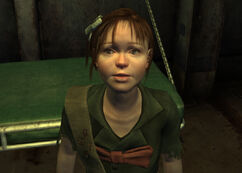 “I'm not supposed to talk to strangers.”

C.J. Young is a young resident of Rivet City and best friend of troubled James Hargrave in 2277.

A trusting and honest young girl, C.J. is one of the happiest kids found in the Capital Wasteland.[1] She's been raised by two loving parents and lives a great life in Rivet City. She spends her time hanging out on the flight deck or exploring the aircraft carrier with her best friend, James Hargrave. A year younger than C.J., James picks on her mercilessly. Nevertheless, she continues to forgive him for his teasing and the two remain best friends.

C.J. is the daughter of Christie and Henry Young. She is the best (and only) friend of James Hargrave.

C.J. Young appears only in Fallout 3.

C.J. and James running off