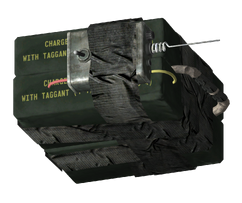 C-4 plastic explosive is a weapon in Fallout: New Vegas.

A powerful explosive weapon that can be placed on the ground like proximity mines, but will not detonate when enemies are near. A detonator must be used to set them off. If multiple C-4 charges are dropped, they will all go off simultaneously when the detonator is activated.

Reverse-pickpocketing plastic explosives will arm them prematurely. If detonated while hidden and staying hidden afterward, the Courier won't face consequences. Even if the target is dead, the C-4 will still be present on their corpse and can be detonated again. Non-player characters witnessing C-4 being placed may make remarks such as "I can see what you're doing!" but they will not take action. However, if the victim is hit when throwing down the charge or if the target wasn't successfully killed with the initial blast, they will turn hostile to the Courier.

It is possible to trigger a C-4 charge without a detonator by shooting it. As long as the Courier remains hidden, non-player characters will not turn hostile. As an improved holdout weapon, it can be brought into weapon-free areas such as casinos with a Sneak skill of 50.

Some versions of the game have a freezing glitch when C-4 is equipped in Vault 22. This can make completing the quest There Stands the Grass a little harder.[verified]

The explosion as seen in game

Detonator of the C-4 plastic explosives 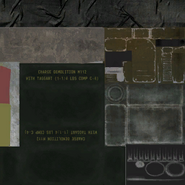