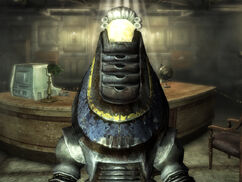 “This is no mere scrap of paper, sir. This is the doctrine laid down by my fellow members of the Second Continental Congress. It absolves us of the tyranny of King George the Third of Great Britain. It is perhaps the greatest symbol of this free nation.”

Button Gwinnett is a protectron who runs the National Archives in 2277.

Due to a memory malfunction, he believes himself to be the real Button Gwinnett, second governor of Georgia and signatory of the Declaration of Independence. He is currently leading the security robots in the basement of the National Archives.

Button Gwinnett appears only in Fallout 3.

When he dies, the phrase "I only regret that I have but one life to lose for my country" is a reference to the Revolutionary War hero Nathan Hale, who said the same thing before he was hanged by the British.

Robotic Button's wig
Add an image to this gallery
Retrieved from "https://fallout.fandom.com/wiki/Button_Gwinnett_(robot)?oldid=2528052"
Community content is available under CC-BY-SA unless otherwise noted.