Button Gwinnett (1735 – May 19, 1777) was an English-born American political leader and the second governor of Georgia.

Button Gwinnett was born in 1735 in Gloucestershire, England to Welsh parents. In 1762, he moved to the United States.

As a representative of Georgia to the Continental Congress, Gwinnett was the second of the signatories on the United States Declaration of Independence. In 1777, he was killed in a duel by a rival, Lachlan McIntosh, following a dispute.

The protectron Button Gwinnett guards the Declaration of Independence in the National Archives in Fallout 3. Button Gwinnett is also mentioned in Fallout 4, as the namesake for a popular brewery in Boston (bottles of Gwinnett ale, pilsners and stouts are commonly found all over the Commonwealth). This is likely a homage to Samuel Adams and the Boston-based brewery whose beers bear his name.

Button Gwinnett is a real world individual, likewise a British-born American founding father who served as a signatory on the Decleration of Independence. 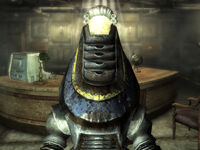 The protectron named after him

The wig worn by the protectron

Button Gwinnett's signature on the Decleration of Independence
Add an image to this gallery
Retrieved from "https://fallout.fandom.com/wiki/Button_Gwinnett?oldid=3222594"
Community content is available under CC-BY-SA unless otherwise noted.