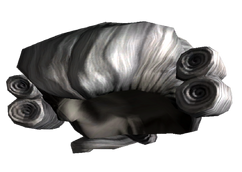 Button's wig is a unique piece of headwear in Fallout 3.

It resembles a powdered wig from the 17-18th centuries.

At the expense of -1 to Perception, it grants bonuses of 1 to Intelligence, 5 to Barter and 10 to Speech skills. It also provides a Damage Resistance of 1. It can only be repaired by merchants.

The wig is found on top of Button Gwinnett's cabinet in the National Archives, near the end of the Stealing Independence quest.