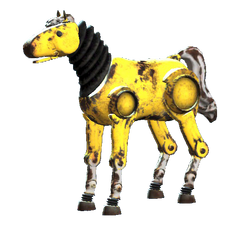 The Buttercup toy is a smaller variant of the pre-War robotic horse Giddyup Buttercup, found on Mothership Zeta. It can be used as ammunition for the Rock-It Launcher.

In Fallout 4, it is a reward item in the unmarked quest Giddyup 'n Go.

Given by Arlen Glass as a reward for bringing him Marlene's holotape from Arlen's office at Wilson Atomatoys corporate HQ. The toy cannot be scrapped.

The location of the Buttercup toy in the research lab

The location of the Buttercup toy in the engineering core, on the table near Kago

Buttercup toy on the shelf below the power cells
Deutsch Русский Українська
Community content is available under CC-BY-SA unless otherwise noted.
Advertisement