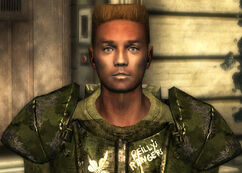 “The name's Butcher, I'm the team medic. It's good to see a friendly face.”

Born in 2246,[1] Butcher is the team's medic. He has saved their lives on more than one occasion. His original name was Carl, but Brick jokingly called him "Butcher" once, and the name stuck. He is the worst of the team in terms of fighting, but his prowess as a medic more than makes up for it. He is currently quite depressed at the death of his teammate, Theo, but there wasn't much he could have done to save him.

Butcher is a member of Reilly's Rangers. Butcher is in a complicated relationship with Reilly, who worries that it may affect them on a professional level.

Until completion of the Reilly's Rangers quest, Butcher can be found at the roof of the Statesman Hotel together with the other Rangers except Reilly herself.

After the completion of the quest, he and the other rangers can be found at the Ranger compound.

* Only if one does not give him any ammunition.

Butcher appears only in Fallout 3.

Retrieved from "https://fallout.fandom.com/wiki/Butcher?oldid=3245330"
Community content is available under CC-BY-SA unless otherwise noted.