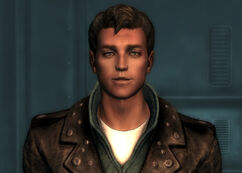 11 (during Growing Up Fast)
17 (during Future Imperfect)
20 (during Escape! and further quests)

Growing Up Fast
Future Imperfect
Escape!
Trouble on the Homefront

Evil or Neutral in Growing Up Fast and Future Imperfect
Good in Escape! and Trouble on the Homefront

“I can show you a real Tunnel Snake, Amata.”

Butch DeLoria is a resident of Vault 101, the leader of the greaser-type gang known as the Tunnel Snakes, and possible companion of the Lone Wanderer in 2277.

Born in 2257, Vault 101's resident bully, Butch masks his fear and sense of inadequacy regarding his alcoholic mother and the lack of a father figure by becoming boorish and overbearing. This masking of his shortfalls has stunted his secret desire to become a barber.[1]

* Should you take his 10mm pistol, toothpick, and ammunition and don't replace them, Butch will use a non-player switchblade and 10mm pistol.

Butch during Growing Up Fast

As seen during Trouble on the Homefront

Wally Mack, Paul Hannon Jr. and Butch hallucination in the Vault 106
Add a photo to this gallery

Retrieved from "https://fallout.fandom.com/wiki/Butch_DeLoria?oldid=3377309"
Community content is available under CC-BY-SA unless otherwise noted.
... more about "Butch DeLoria"
RDF feed
Has platform
Playstation 3 +  and Xbox 360 +