Buster's Fine Emporium of Armament is a small gun store run from a tent by the eponymous owner, Buster, in New California in 2241.

The store, which consists of one tent, is next to Son of Bob's Iguana Bits and is guarded by two men in combat armor. Buster resides inside the tent and sells weaponry. Buster offers a number of attachments for various weapons, including the scope for the hunting rifle.

The tent is surrounded by shelves with what seems to be duffle bags, containing additional ammunition and weapons stock. There is a fourth guard standing further away from the tent, most likely guarding the shelves against any passers-by who have sticky fingers.

Buster's personal bodyguards are equipped with Bozar light machine guns and are wearing combat armor and will attack the Chosen One should they offend Buster or get caught stealing from his shop.

Buster's Fine Emporium of Armament appears only in Fallout 2. 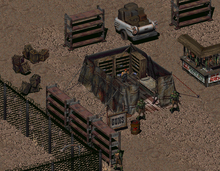