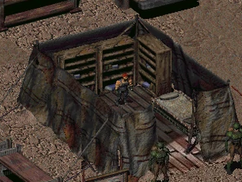 Buster is a dwarf and NCR's premier weapon seller and runs Buster's Fine Emporium of Armament in 2241.

Cheerful, despite his short stature, ragged clothes and gun-bluing all over him,[1] Buster is an exemplary weapons merchant, selling high quality weapons at affordable prices. He is a true weapons nut and loves working with them, including upgrades; whenever he has an attachment available, he is willing to sell it to a professional looking for quality.

Buster is a weapon merchant in NCR Bazaar, selling mid-to-high level weapons and ammunition. In addition to weapons, he also has a single Triveld x10 scope for a single hunting rifle, available for sale for $500. Each of the three shelves behind him have items available for purchase, and depending on whether the Barter button is used or entering the screen through dialogue, a different shelf's inventory will be displayed.

Buster appears only in Fallout 2.

Retrieved from "https://fallout.fandom.com/wiki/Buster?oldid=3419091"
Community content is available under CC-BY-SA unless otherwise noted.