Bust out of jail 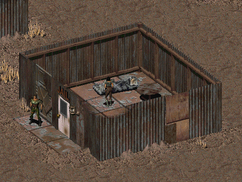 “You have broken out of the jail. You're now definitely a fugitive in Junktown!”

Bust out of jail is an unmarked quest in Fallout.

If caught doing any criminal deed (when stealing for example) by Junktown guards or Killian Darkwater or declining to help get Gizmo's confession, the mayor himself proposes that the Vault Dweller go to jail peacefully. If refused, it turns Killian and the guards hostile. Otherwise, the Vault Dweller will be placed in the Junktown jail under Andrew's supervision. This will decrease Reputation by 3.

The jail door is locked, so it needs to be opened with lock picks or forced out with a crowbar. A reward is granted when the Vault Dweller steps out of jail.

Retrieved from "https://fallout.fandom.com/wiki/Bust_out_of_jail?oldid=3345580"
Community content is available under CC-BY-SA unless otherwise noted.