The Commonwealth
The Island
Nuka-World

Buses are vehicles found in multiple spots throughout the Commonwealth.

School buses painted in a yellow school bus livery can commonly be found close to various schools, including Suffolk County Charter School, D.B. Technical High School, and on top of the schoolhouse in Diamond City. Several Nuka-World branded buses are at the amusement park. Their density increases the closer one gets to downtown Boston and on what's left of many highways. Some buses read Massachusetts School District on the side.

Most buses, as long as they aren't turned over, can be entered by a door in the middle. Inside, some will have a few loot containers. Others offer a place to sleep. Feral ghouls sometimes hide inside waiting to attack those that happen to enter.

Buses are located under Structures → Miscellaneous in the workshop.

Buses appear in Fallout 4, craftable as of the Wasteland Workshop add-on. 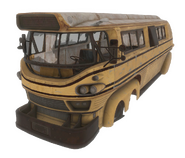 Back of the school bus

Inside the school bus