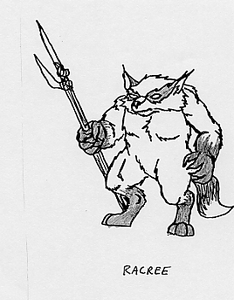 The Burrows (rarely referred to as "Coons") is a small community, founded in 2101 by FEV-mutated raccoons known as S'Lanter from the West Tek Research Facility.


With batch 11-011, we have improved the mitotic cycle efficiency by 43%. We have infected 53 raccoons with the new strain. In addition to the now expected size increase, behavioral tests confirmed an increase in intelligence and manual dexterity by 19 points on the Schuler-Kapp index. Unfortunately, several subjects escaped confinement and had to be hunted down and dispatched. Major Barneet ordered the remaining subjects terminated. Two pairs were unaccounted for.

The above excerpt is from the FEV experiment disk found at the Glow in Fallout and is the only remaining in-game reference to the non-existent area.

The four raccoons that escaped the research facility headed north-west until 2101, when they discovered a small oasis that had, amazingly, avoided a great deal of devastation and had begun to regrow. Once they settled the area their instincts took over and they became skilled hunters as well as becoming more intelligent. They named themselves the Tribe of the S'Lanter (S'Lanter means Kindred), having forgotten they were once raccoons.

When they escaped from The Glow, they had taken with them many devices and texts. From these they were able to learn English and about the devices and technology behind them. This caused further growth in their intelligence.

The first buildings they made resembled human dwellings. However, Neres-Ka (the 'leader' of the S'Lanter) remembered what the humans had done to them at the Glow and stated that the Burrows would not be human city and they should revel in their animal side. Many of the buildings were then created with branches, sticks and leaves. This building style continued until the events of Fallout and presumably beyond.

Many of the S'Lanter were curious about the outside world and began sending out small parties to explore the surrounding area. In 2106, one of these parties met a group of people; raiders from the Jackal tribe. When the humans spotted them they opened fire, killing and wounding many. The few who made it back to the Burrows caused a stir in the small community. Some wanted to protect themselves against the humans and rigged the area around the Burrows with traps. They then founded the area of the Burrows called the Dens, an underground system of tunnels accessible only by hidden entrances. They quickly became the more animalistic of the two groups and took the role of the hunters.

The other group, called the top-dwellers, built their homes around an old oak tree that served as the town hall.

The few humans that have entered the Burrows were killed by the Den-Dwellers.

The "old ones", the original escapees, never told any of the others what had happened at The Glow. All they ever said was that they had originally come from the Glow (named so because an old one who tried to return could only see a great glow on the horizon and decided to turn back). The "old ones" told the others to forget about it; the Burrows was their home now.

But, when Neres-Ka, the last of the old ones died, many of the younger S'Lanter began to wonder where they came from. They read the journals of the old ones and the texts from the Glow but all they could find out was that the Glow was where they had come from.

During the great winter of 2130, many of S'Lanter died and had little to fall back on. Minishen, the new leader of the S'Lanter, devised a new religion, "the religion of the glow" to give them hope. He told everyone that the gods lived at the Glow and that these gods had created them. To prove it, he showed them the journals of the old ones talking about "masters" at the Glow and how these masters "made them".

When the winter ended, Minishen kept the religion as he knew there would be more hard times. His followers believed that the gods had helped them survive. But, in 2150 Minishen died without telling anyone that the religion was false. Nor could anyone disprove it, as all who went to the Glow died.

In 2161, a S'Lanter went to the Glow and managed to return. Dying from severe radiation poisoning, he said "There are No gods, only death". This divided the Burrows again, with the Den-dwellers being fanatical believers in the gods while the Top-dwellers are far more skeptical. This division brought the Burrows to the brink of civil war.

Retrieved from "https://fallout.fandom.com/wiki/Burrows?oldid=3017068"
Community content is available under CC-BY-SA unless otherwise noted.