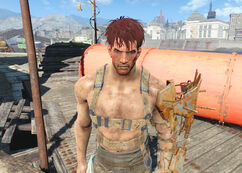 According to B-263's mission log, R3-11 was originally created by the Institute as a "highly optimized combat unit." At some point, he escaped the Institute and had his memories altered by the Railroad to give him a new identity. He took the name Burner and joined the raider gang at Back Street Apparel.

B-263, an Institute Courser posing as a detective, discovered that he was meeting with fellow escaped synth PR-15, also known as the Gunner Captain Carol Janssen at the Fairline Hill Estates. B-263 considered this "odd behavior" and speculated that the two might remember each other, suggesting that their memories were somehow returning.

B-263 confronted the pair during one of these meetings but they managed to kill him and escape.

Retrieved from "https://fallout.fandom.com/wiki/Burner?oldid=3270483"
Community content is available under CC-BY-SA unless otherwise noted.