Dapper
“Most people judge based on appearances. They don't care to know me. The person who exists beyond their preconceptions. I have no need for male or female, or anything else. I'm free.”

Burke is a member of the Raiders, found in the Crater war room in Appalachia.

Burke was once a guard whose employer kept Pierce as a prisoner. Despite the situation, Pierce treated Burke with respect. Sheena arrived and the three decided to escape together.[1] Burke felt their employer deserved worse than death, but instead of killing him, Burke stole his most treasured possession: a dove necklace. Burke views the necklace as a reminder for who they are and the values they believe in.[2]

Burke is a quiet member of the Crater Raiders, at least around the Vault Dweller, and prefers actions over words. Burke will become more talkative and open up to the Vault Dweller upon seeing they can be trusted, especially if their dove necklace is returned. Burke's role involves guarding, general labor and killing enemies.[3]

When they first joined the group, other Raiders had incorrect expectations about what Burke would be like. They gave Burke "titles" such as "The Silent Man" and "Albino Dog." However, Pierce approached Burke, asking if something else would make them feel better. Eventually they decided to refer to Burke with a neutral "they." Although Pierce does not fully understand Burke's feelings, he wants them to feel comfortable in the group nonetheless and uses Burke's preferred pronouns to respect them.[4]

Burke highly treasures and is protective of their friends Pierce, Sheena and Marcia Leone. Burke admires Marcia for being nice and having resilience. Burke finds Sheena to be a little scary sometimes, however.

Burke appears only in Fallout 76, introduced in the Steel Dawn update and expanded upon in Steel Reign.

Burke is the only known character in the Fallout series to identify off the gender binary, preferring neutral pronouns. Burke was written by quest designer Ellys Tan, who also uses they/them pronouns.[Non-canon 1] Burke's voice actor is also genderfluid and prefers the same pronouns as well. 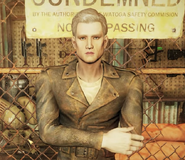 Burke in the War Party room