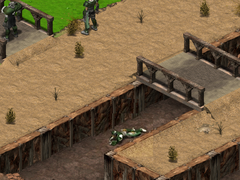 Burke, to the top left Barnaky

“Brothers! I thought I'd been left. They ... they got the General. Bastards took him alive. <cough> They killed everyone else and wired me up with some C4. It's a trap <cough> you gotta help me. I know I shoulda warned you earlier, but, Ok I don't wanna die. Get this fucking rig off me! Do it grunts! You guys are expendable, I'm senior. <sob>”

Burke was a member of General Simon Barnaky's Brimstone Squad in 2197.

Near the end of the battle in St. Louis, General Barnaky, Burke and another warrior were all that was left of their squad. They were confronted by Toccomatta and his super mutants. While Barnaky and the other warrior engaged their overwhelming enemies in combat, Burke hid behind them in a trench line, scared of being killed. The other warrior was killed (or possibly taken prisoner, since his body is not found near the site of the battle) and while the super mutants were taking Barnaky alive, he shouted to Burke for help, and while Barnaky's captor was in line of fire, Burke didn't shoot. He didn't hide successfully, however, as soon he was found by a super mutant who attached a C4 to him while laughing.

When the Warrior came to evacuate the remnants of the battle, he found Burke, who demanded him to save his life, claiming that his survival is more important, as he has higher rank. If he is saved from being blown up, he reveals to the Warrior his undoing, and finally overcomes his fear for his life, committing suicide.

Burke states that when General Barnaky was being taken alive, he "ordered him to kill him", meaning he either ordered him to kill his captor or the General himself to prevent giving away vital information, this could mean he simply didn't shoot out of loyalty. However, Burke tells the Warrior that he did not open fire because the mutants would have spotted him.

Burke appears only in Fallout Tactics.

If the Warrior disarms the explosive via Traps skill, an explosive will appear before him. That explosive has no name and if picked up, it is not seen in the inventory, yet weighs 5 pounds.

Retrieved from "https://fallout.fandom.com/wiki/Burke_(Fallout_Tactics)?oldid=3153458"
Community content is available under CC-BY-SA unless otherwise noted.