EyebrowM
“What you did, it was a great thing. That place, those people... necessary sacrifices. Here's to a better future. Here's to Tenpenny Tower!”

Burke was born in 2221, making him 56 years old during the events of Fallout 3 in 2277. Mister Burke is first found spending his days at Moriarty's Saloon, drinking and talking to Colin Moriarty or asking Gob, the ghoul bartender, questions such as: what is it like being a ghoul, the effects of radiation on his body, and what it's like to live among the non-irradiated populace.

He can be found sitting in a chair in Moriarty's Saloon before the start of the quest The Power of the Atom. If the Lone Wanderer accepts the fusion pulse charge, he will go back to Tenpenny Tower once the task of re-arming the bomb is finished, and will wait for the Lone Wanderer to rendezvous with him. Alternatively, if the Lone Wanderer disarms the nuke, he will leave Moriarty's Saloon and travel back to Tenpenny Tower (this might take him a few days, and he may be killed in the wasteland); he will then spend all of his time in or on the same floor as his suite.

“Mister Break is a figment of your Punga-infused imagination. Isn't he? Yes, yes he is. Or is he? Yes, most definitely, he is. Right?”— Fallout 3 Official Game Guide, on Mister Break

Mister Break is a character found in the Sacred Bog area of Point Lookout. He is a part of the hallucination that occurs after the Lone Wanderer consumes punga seeds and is seen leaning against an atomic bomb, similar to the Megaton bomb but much larger. After interacting with him, the bomb explodes, and the Lone Wanderer wakes up outside of the Sacred Bog. The character looks identical to Mister Burke, including his clothing. When spoken to, he will respond in Tobar the Ferryman's voice and he gives a warning to not get up, saying "you might hurt yourself." Mister Break is an essential character. 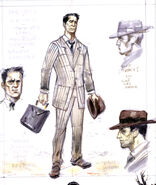 Mister Break, his alter ego, can be met after collecting seeds during Walking with Spirits in the Sacred Bog at the Luck Bubblehead.