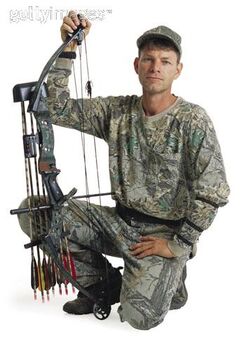 Burk is the leader of the Scorpion's Bite raider clan and a member of the Hounds of Hecate raider gang in 2253.

Burk is the leader of the raider clan 'Scorpion's Bite'. The clan received its name because of their use of radscorpion poison. Bullets, knives, daggers, and arrows are all coated with this toxic substance for maximum effect in combat. Burk is a master archer and keeps his arrows treated as well.

Burk is an educated man. He spent several years in the NCR and with the Followers of the Apocalypse studying. He became a raider because he enjoys the power and commanding the respect of others. He realizes that he is a parasite but could care less. Survival of the smartest and the fittest is a motto that he endorses.

The Scorpion's Bite clan currently resides in the forbidden lands of the Twin Mothers tribe. When Burk discovered the tribe he was amazed at the level of technology that they displayed and yet how primitive they were at the same time. He decided to befriend the tribe and learn as much about them as he could. After discovering their pacifist ways, he began demanding tribute from them in the form of food and livestock. He maintains his camp in the forbidden lands knowing that the tribe will not enter them and thus will not ambush the clan during their sleep.

Burk is currently trying to figure out what is the true power behind the Twin Mothers tribe. He has seen the inactive security robots throughout the tribal lands. He has also seen them activate each night, travel to a nearby pipe, and disappear only to reappear an hour later. When he investigated the pipe he discovered a thick steel door but could not open it. Could this be one of the mythical vaults? If so, what is inside? He intends to somehow find out.

Burk has not appeared nor is he mentioned in any published game. He was to appear only in Van Buren, the canceled Fallout 3 by Black Isle Studios. It is not certain if he will appear in any future Fallout game.

Retrieved from "https://fallout.fandom.com/wiki/Burk_(Van_Buren)?oldid=3175925"
Community content is available under CC-BY-SA unless otherwise noted.