“Don't fire 'til you see the whites of their eyes.”— Bunker Hill placard

Bunker Hill Monument,[1] known after the war as Bunker Hill, is a location and potential settlement in the Charlestown neighborhood of Boston in 2287.

After the Great War, the tall obelisk still stands, now home to caravan traders. In the past, the Minutemen protected the settlement from the dangers of the Commonwealth, but after failing to answer a call during a raider attack, the Minutemen are no longer held in high esteem by the local traders. As a result, the residents must now pay "protection money" to the area's raider gangs (including those led by Wire and Jared) to avoid being attacked, and rely mostly on mercenary protection against those who can't be bought, such as super mutants or gangs which do not honor their deals.[2][3]

The Railroad has a base underneath the complex, where they prepare synths for extradition from the Commonwealth. During their purge of the Railroad, the Institute attacks this complex, with the outcome of the battle dependent on the Sole Survivor's actions.

The perimeter of Bunker Hill is surrounded by a large wall, allowing access only through the main gate on the south side and a small door on the east side. In front of the main gate in the center of the settlement is an obelisk with stairs inside leading to the top. Behind the obelisk to the north is a large open market with Deb, the general storekeeper, to the east, and one of the traveling caravan merchants to the northeast. Old Man Stockton and Meg may be wandering the area. To the southwest behind an unoccupied counter is the initially inaccessible hatch to the utility basement.

Just west of the main gate is Kay's building where medical treatment is available; the settlement workshop sits behind the counter. Next to Kay's clinic in the southwest corner is Kessler's home. Following the wall to the north is a brahmin pen and another shack. In the northwest corner is Joe and Tony Savoldi's place, where food and lodging are available. Another shack is to the east along the north wall, under the toilets. Three more shacks are along the east wall.

For food and water, there are four tato plants and two corn plants just south of the east entrance, with a water pump on the north side of the shack to the north of that entrance. A second water pump and six additional corn plants can be found near the shack just north of the brahmin pen on the west side. Inside the market, a purified water fountain is in the northeast corner to the left of Deb's counter. Unless the utility basement is unlocked, there are no workbench facilities (see Notes below). Unless the settlement is unlocked, the only storage containers the player character can use are a file cabinet next to the toilets and a toolbox in the shack below the toilets.

Bunker Hill appears in Fallout 4, and is mentioned in its add-on Nuka-World.[5]

Bunker Hill is based on the real-world monument of the same name. 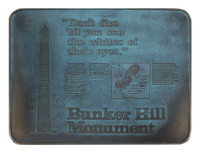 The Sole Survivor making their way to the monument 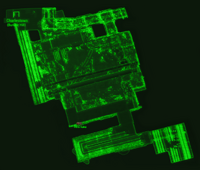