Bunker Gamma is a location in Fallout Tactics. it is a base of operations for the Brotherhood of Steel in the Midwest, located northeast of St. Louis and Mardin.

After the Brotherhood defeated the psychic Beastlords, they moved south to this bunker to establish a secure area of operations. General Simon Barnaky was stationed here before he was taken prisoner by Toccomatta. He was replaced by General Dekker.

Many of the inhabitants of this bunker are already known: Tiduk, Shauri, and Celsius, the medical officer. The quartermaster is Arugula, while the squad management is regulated by Personnel Yeoman. Murdock and Bartholomew Kerr are trading some valuable items here. Paladin Lancelot could be seen there as well. Hillary Eastwood is present in the command room during the meeting with the elders. The deathclaw matriarch and Elliot Nesting are seen as guests here. Also, Hazmat Hazzard, the ambassador from Kansas City, would come here to help the Brotherhood with the nuke, if her people were saved.

One can find an Easter egg object in a locked locker and can gamble with the quartermaster. 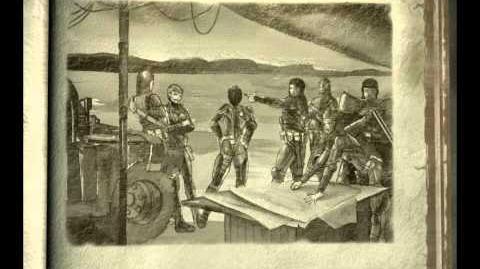