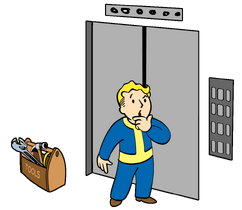 “Unlock a secure bunker and discover the secrets within.”

Bunker Buster is a main quest in Fallout 76. Completing this quest allows the player character to learn about the Enclave and gain access to the Whitespring bunker.

The quest is started either by completing Uncle Sam which leads the player character to the abandoned waste dump in the northern end of the Mire or by independently finding the corpse of Agent Grey and listening to the holotape found on his corpse.

The abandoned waste dump is inhabited by two deathclaws who are hostile to anyone who enters. The elevator which leads to Sam Blackwell's bunker below is locked. Search the area for Agent Grey's corpse (the northeastern section of the cave) which contains a holotape, Operation Summary - Blackwell, which indicates that a bypass holotape will allow access to the elevator and gives hints of some of the upcoming obstacles such as a laser grid and a security keypad. Search the deathclaw nests in the area to find the bypass holotape. The nest where it spawns is randomized.

After acquiring the bypass holotape, go back to the elevator and use the Pip-Boy to play the holotape while standing very close to the access panel. This will unlock the elevator and allow access into the bunker.

The innermost areas of the bunker are further protected by a laser grid. A security system manual reset note can be found in a desk in the area above the laser grid and gives instructions for resetting the system: activate the circuit breaker in the laundry room; open up the air flue above the generator; and activate the circuit conduit which is located above the vents. The location of these steps will be indicated by quest markers and they can be completed in any order. Alternatively, the security system terminal nearby can be hacked with Hacker 3, allowing the system to be reset without going through the previously described process. Activate the hand scanner by the security grid to gain access to Sam Blackwell's office.

There is a keypad in the room which requires a security code. Search the room for possible codes hidden in notes and terminal entries. The correct code is 021584 which corresponds to the date of Judy Blackwell's death, found in an entry titled 'Judy's Gone' on the terminal in the room. Enter this date into the keypad and a strange sound will be heard behind a painting of a ship on the wall. Reach behind painting to find a Congressional access card and a holotape, Welcome to the Whitespring. Listening to the holotape will complete the quest and begin One of Us.

Retrieved from "https://fallout.fandom.com/wiki/Bunker_Buster?oldid=3185457"
Community content is available under CC-BY-SA unless otherwise noted.