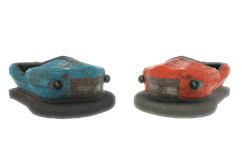 A bumper car is a world object in the Fallout 4 add-on Nuka-World.

A small, carlike vehicle with an encircling rubber bumper that maneuvers around an enclosed arena, the goal being to purposely bump into other vehicles. The bumper cars have the Nuka World logo on the back, appearing in either orange or blue. Several are featured in and around the Cola-cars arena. Bumper cars can also be crafted in settlements once the requirements are met.

Crafting of the red and blue bumper cars is unlocked upon either finishing or failing the quest Taken for a Ride.

Craftable red bumper car
Add a photo to this gallery
Retrieved from "https://fallout.fandom.com/wiki/Bumper_car_(Fallout_4)?oldid=3518095"
Community content is available under CC-BY-SA unless otherwise noted.