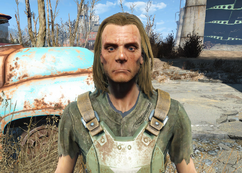 “You can work him real hard.”— Bullet when asked how much Billy Peabody is worth

Bullet is a Gunner operating out of Quincy in 2287.

Not much is known about Bullet, apart from the fact he seems to be a high-ranking member of the Gunners, who leads a small team. He also appears to have no ill thoughts about enslaving people for his own needs, even going as far as to buy ghoulified children from complete strangers.

Bullet appears only in Fallout 4.

Sometimes Bullet does not appear at all. You may resolve this by sending your companions away, then fast travel to somewhere near (University Point) to run the script. PC users can circumvent the problem by teleporting him using this console command 00028db8.moveto player.[verified]

Retrieved from "https://fallout.fandom.com/wiki/Bullet?oldid=3287765"
Community content is available under CC-BY-SA unless otherwise noted.