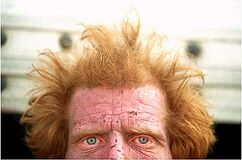 Build Sid's Self-Esteem was going to be a quest in Van Buren, the canceled Fallout 3 by Black Isle Studios. It was located in the Bloomfield Space Center.[1]

Seeing as in how Sid is a zero in almost anything he touches or does, the Prisoner may help him as a therapist with his problems, and move him up on the self esteem ladder.

Helping Sid with the mega-flamer, the sub-reactor, and whatever else he is working on, and actively teaching him along the way, will make Sid feel better about himself.

Retrieved from "https://fallout.fandom.com/wiki/Build_Sid%27s_Self-Esteem?oldid=2776642"
Community content is available under CC-BY-SA unless otherwise noted.