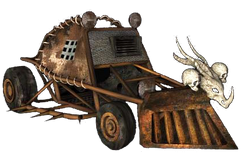 The Buggy is a drivable vehicle in Fallout Tactics.

Cobbled together by a bunch of drunken raiders in a barn. Very unreliable so it's not your ideal vehicle for taking on the might of the wastelands. But it is reasonably fast and maneuverable so it can be used in hit and run tactics against lightly armed enemies.

This vehicle only showed up if the player pre-ordered Fallout Tactics. It was attached to a bonus mission called Springfield, where it belongs to a gang of raiders, who were a ghoul-hating group.

The Buggy appears only in Fallout Tactics.

There was an upgradeable raider buggy planned for inclusion in Van Buren, the canceled Fallout 3 by Black Isle Studios.[Non-canon 1] 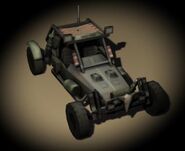