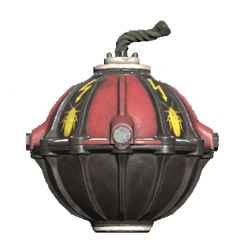 Ordnance Express
Fire in the Hole

The bug grenade is a weapon in the Fallout 76 update Wild Appalachia.

A red and black grenade with yellow bug decals.

When thrown towards insects, the bug grenade deals increased damage. The bug grenade can also inflict poison damage-over-time (dot) on any enemy caught in the blast radius.

The bug grenade is the only grenade that explodes upon impact.

May be given to the player by Scout Leader Treadly for completing Stings and Things.

Retrieved from "https://fallout.fandom.com/wiki/Bug_grenade?oldid=3338775"
Community content is available under CC-BY-SA unless otherwise noted.