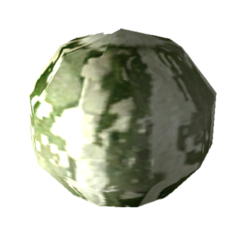 +1 Hit Point per second for 2sHardcore mode only:
-10 Starvation

The buffalo gourd seed is a consumable item in Fallout: New Vegas.

A common consumable, harvested from vines or available for purchase from Mojave vendors. The vines can be found on roadways and in the open desert, visible by their light green color.

With the Lonesome Road add-on, buffalo gourd seeds are used in conjunction with surgical tubing to create snakebite tourniquets.

The buffalo gourd seed is a real world plant, known as Cucurbita foetidissima.

If a buffalo gourd seed is dropped, and then viewed, the weight will be displayed as 0.00.[verified]

Retrieved from "https://fallout.fandom.com/wiki/Buffalo_gourd_seed?oldid=3490778"
Community content is available under CC-BY-SA unless otherwise noted.