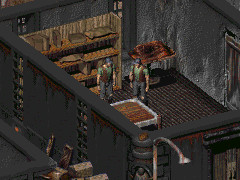 “You just better push off, or my brother and I are going to pound your little head into jam.”

Buck Dunton is one of the twins running a Klamath shop in 2241.

He is a tall, heavily muscled man whose face, beneath his beetling brow, is habitually twisted into a bully's smirking scowl.[1] He is identical to his brother, Chuck, to the point of using exactly the same phrases and mannerisms. They are the makers of their "world famous" Dunton meat jerky, made from old, rotten meat, flavored with spices, homemade sauce and choice boot scrapings from the pen.

They spend their nights in the Golden Gecko tavern, drinking and looking for people to wrestle. Their livelihood, though, are brahmin, or rather, stealing brahmin from farmers in the area, typically Torr Buckner.

Buck Dunton appears only in Fallout 2.

Retrieved from "https://fallout.fandom.com/wiki/Buck_Dunton?oldid=3301759"
Community content is available under CC-BY-SA unless otherwise noted.