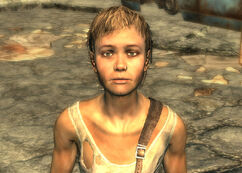 “My pappa had a gun, and he said it hurt those things, but he said they were the dumbest Fuckin' Ants he ever saw.”

Bryan Wilks is an eight-year old boy living in Grayditch in 2277. Speaking to him begins the quest Those!

Bryan spent his childhood living in Grayditch with his single-parent father, Fred Wilks, often playing with the teenage son of William Brandice. Together, the two boys explored all of Grayditch and learned the best places to hide from giant ants. Bryan also pestered Doctor Lesko with questions. His father always told him that if he made a mistake, he had to apologize three times, and then decide if he actually meant it.

He survived the fire ant attack on Grayditch by hiding underneath a demolished car. The huge insects overlooked him and moved on after carrying off their prey. Since the attack, Bryan's food and water supply has dwindled (his father used to make trips to stock up for the entire settlement), and he has left the safety of the small settlement in hopes of finding help.[3]

At the end of the quest, Bryan is left alone and orphaned and goes to live in his former home. The player character then has the following options:

Later in the game, one can check on him. If he is with Vera in Rivet City, he will be very happy and grateful to the Lone Wanderer for getting him there. If he is still in Grayditch, he will be lonely and miserable, but at least safe. If he is in Little Lamplight, he will think the other kids are weird and say he would have enjoyed Rivet City much better. If the player character sells him to Eulogy, he disappears from the game permanently.

If one simply leaves him in Grayditch, Three Dog will criticize the player character, saying that "you left the kid to rot in that fallout shelter." If one sells him as a slave, his remarks will be even more negative. In contrast, if one gets Bryan to Rivet City, Three Dog's remarks will be positive.

Bryan appears only in Fallout 3.

While in the shelter, Bryan will say "Now I know what a TV dinner feels like." This is a reference to the movie Die Hard, where John McClane says the same thing while crawling through a narrow ventilation shaft.

Retrieved from "https://fallout.fandom.com/wiki/Bryan_Wilks?oldid=3469324"
Community content is available under CC-BY-SA unless otherwise noted.