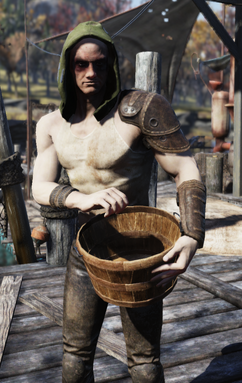 Bruiser is a member of the raider group at Ohio River Adventures in 2103.

Bruiser once lived in a vault, where his pre-War memories slowly faded away. He claims that he participated in a war-like gladiator sport while inside the vault. If the player character points out that his description of the event sounds similar to a game of American football, Bruiser will reject the notion, adamant about his memories as a fighter. He left the vault at some point and found himself in Appalachia.

After helping establish the Crater, Fishbones, Gills and Blackeye were sent to establish an outpost at Ohio River Adventures, where they could coordinate the trade of mirelurk products such as eggs and softshell meat. While making the trip southwest, Fishbones woke up one night to Bruiser "beating the tar" out of Gills, who was on night watch. Bones figured that he had found Gills' replacement, as Gills could no longer walk from the beating he received. Bruiser, Bones and Blackeye now lead the outpost, though they have recently been having troubles with mirelurks attacking the docks.

Bruiser appears only in Fallout 76, introduced in the Wastelanders update.

Retrieved from "https://fallout.fandom.com/wiki/Bruiser_(Wastelanders)?oldid=3342477"
Community content is available under CC-BY-SA unless otherwise noted.