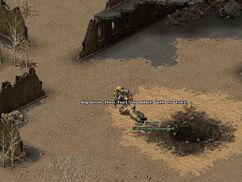 The Grimm details of using feet to disarm mines

Brothers Grimm is a special encounter in Fallout Tactics.

Here, you'll find two super mutants named Jim and Joe Grimm. Joe stands over his injured brother, Jim, after he was injured by a landmine. If the player helps heal Jim, both mutants will later be available in the recruitment pool.

Joe and Jim Grimm are a reference to Jacob and Wilhelm Grimm who are popularly known for publishing a number of German folktales during the early 19th century (Hansel and Gretel, Cinderella, etc. to name a few). In this parody, however, the Grimm brothers are semi-illiterate. Jim says, "Sorry, brother, me stupid." Joe, despite carrying a copy of Big Book of Science and Dean's Electronics (both of which can be stolen), says, "the old Brotherhood would of shot first and asked questions later."

Joe and a fully-healed Jim Grimm
Add an image to this gallery
Retrieved from "https://fallout.fandom.com/wiki/Brothers_Grimm?oldid=3102839"
Community content is available under CC-BY-SA unless otherwise noted.