Brotherhood soldiers are responsible for collecting technology across the Commonwealth and enforcing the will of the Brotherhood. Soldiers who display exceptional loyalty and valor are promoted up the ranks, gaining more formidable gear along the way.[1]

Initiates are commonly found at low levels when traversing the Commonwealth, and when the player character reaches higher levels, aspirants begin to take their place as the "low level." Brotherhood ground soldier.

Aspirants are switched out with initiates at lower levels at random. When the player character reaches higher levels, they replace initiates permanently.

Knights are the most commonly found Brotherhood soldier, from guarding checkpoints to acting as drop shock troops off of vertibirds, the Sole Survivor will encounter knights at almost any level.

Knight sergeants slowly start to replace knights in Brotherhood of Steel areas, such as checkpoints, guarding the Prydwen, Waypoint Echo, etc. With the exception of Gavil during the quest Ad Victoriam, They do not have the appropriate paint for their T-60 power armor, instead having common knight paint.

Knight captains begin replacing knights and knight sergeants as the Sole Survivor progresses in level. They will almost completely replace knights at level 50-56.

One of the strongest Brotherhood NPCs in the game, at early levels, they will often be found guarding the tarmac surrounding Liberty Prime in a full set of sturdy combat armor of the Brotherhood variant.

A rare and extremely deadly paladin breed, even without power armor they have powerful weaponry at their disposal, and may have several pulse or plasma grenades. They level with the player.

Some of the generic dialogue between Brotherhood soldiers on the Prydwen are references to "frequently spoken" things said by voice director Kal-El Bogdanove.[2] 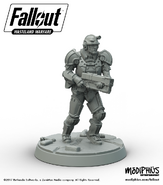 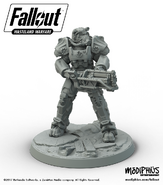 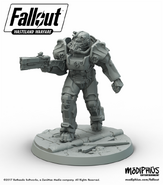