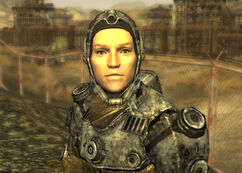 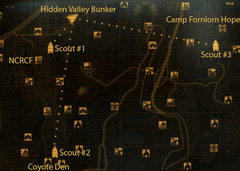 These three Knights were sent out by McNamara on scouting missions. When the patrols failed to return, McNamara assumed the worst and sent a single communication to the scouts to hold position and maintain radio silence. They hold reports from nearby NCR movements which the Courier needs to acquire and return to McNamara.

Still in the Dark - McNamara wants the Courier to contact the scouts and gather their reports. Once found, they need a secret phrase to be responsive. The Courier should return when all reports are gathered.

The Brotherhood scouts appear only in Fallout: New Vegas.

Scout south of Camp Forlorn Hope
Add an image to this gallery
Retrieved from "https://fallout.fandom.com/wiki/Brotherhood_scout?oldid=3266907"
Community content is available under CC-BY-SA unless otherwise noted.