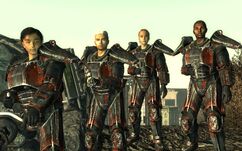 “This is such a wild goose chase. Lost tech? Please. Only thing we're going to find in this tomb is canned peaches and moldy blankets.”

Brotherhood outcasts come in 3 different unofficial skill ranks, each equivalent to the Initiate, Knight, and Paladin ranks of the main Brotherhood of Steel. They are neutral to the player character and other non-hostile wastelanders, albeit very rude and condescending. They will engage in combat against hostile Wasteland creatures, raiders, and Enclave soldiers.

As an elitist group, the Brotherhood Outcasts are unable to increase their numbers with local recruits, unlike the Brotherhood itself. To compensate, they often supplement their squads with reprogrammed combat robots, such as robobrains or sentry bots. Outcast patrols in the Capital Wasteland typically consist of 3 Brotherhood outcasts, or 2 outcasts and a combat robot.

Outcasts can be found at their main base of operations, Fort Independence, which is manned by the main contingent of Brotherhood outcast soldiers. There is an Outcast detachment occupying an outpost in Bailey's Crossroads. Also, a moderate Outcast presence can be found in the vicinity of Fort Constantine and the SatCom Array NN-03d. Three outcasts will always be found outside Fort Constantine patrolling a rising path just off the road leading to the facility(in addition to any Outcasts that may spawn periodically near the main gate). Two pairs of outcast soldiers are always found near the SatCom Array; one pair patrols to its southwest near the remains of a metal shack, while another pair patrols northwest of the first, between the array and the fort.

Brotherhood outcast squads can be found patrolling the Capital Wasteland in various areas. These squads usually consist of three soldiers or two soldiers and a robot escort, and spawn as either part of 'Type B' random encounters or at preset patrol spawn points.

Outcast patrols will spawn near the listed locations at preset spawn points and are not random encounters. The 'wait' function can be used to force spawn patrol members if the patrol has left the area. Patrols members that are killed will not spawn again for 72 hours. The patrol members that appear at these preset points are the same ones as those that in the random encounter for 'Brotherhood Outcast Patrol (unique characters)'. Additionally, any member of a patrol that is injured will retain those injuries when spawned elsewhere.

The Brotherhood outcasts appear in Fallout 3 and its add-on Operation: Anchorage. 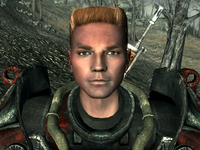 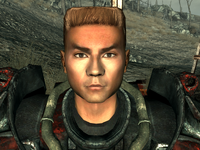 Add an image to this gallery
Retrieved from "https://fallout.fandom.com/wiki/Brotherhood_outcast?oldid=3163737"
Community content is available under CC-BY-SA unless otherwise noted.