Fallout Wiki
Register
Don't have an account?
Sign In
Advertisement
in: Pages with broken file links, Brotherhood of Steel
English

The following outlines the Brotherhood of Steel ranks seen throughout the Fallout series. For a comprehensive list of characters listed by game, see characters article. For a general overview of hierarchy, see this article.

Each rank is part of a hierarchy that follows the Chain that Binds.[1] The ranks were devised by Roger Maxson, serving as a way to help transition the former members of the United States Armed Forces into the Brotherhood.[2][3]

The high elder is the leader of the entire Brotherhood of Steel and the other elders. High elders may also be addressed as generals, as an honorary title.[4][5][6]

The elders form the Brotherhood's ruling council. Individual elders are occasionally leaders of localized chapters of the Brotherhood.[Non-game 1] Under normal circumstances, the ability to become an elder is reserved for paladins, although there are exceptions, such as Elder Elijah, who was a scribe.[8]

Sentinel is a rank used by the East Coast division, ranking between star paladin and elder. Sentinels do not require specific orders and usually conduct operations at their own discretion, with the elder issuing only standing, high-level orders. Sentinels are appointed directly by the chapter's elder, acting as an extension of their will. There is no requirement to appoint a sentinel and many chapters can go for years without one.[9]

“A Paladin must be a leader first, and a person second.”— Knight Daniel Shin

The main commander of the paladins, responsible for overseeing their operations and training them.[10] The head paladin may induct other members of the Brotherhood into the paladins at their discretion, depending on their aptitude.[11]

Senior paladins are paladins that show promise to become head paladins. They are well respected among other paladins and knights and can greatly increase the morale of soldiers .

Star paladins are paladins who have been recognized by the Brotherhood for their honor, loyalty, and tenacity in battle. They are given far more freedom (similar to sentinel) in how they conduct operations, although not as much as a sentinel would.

Paladin commanders are unit leaders in the Eastern Division and are well respected among the Brotherhood's ranks. They are scarcely found in the field, often planning with the other commanders in the Brotherhood, but when they are, they are a force to be reckoned with, often found with powerful energy weapons and leading huge forces. They rank only below star paladin, sentinel, and elder.

The commander of the knights, in charge of all their operations. The Brotherhood allows for positions to be combined, and one person can be both head knight and head paladin.[15]

Knight commanders are often seen in the field leading shock troopers dropped off of Vertibirds, or in charge of a command post in the Commonwealth, leading lower ranking knights into battle. They are the highest ranking knights in the Brotherhood.

Knight captain is a rank used by the East Coast division.

Knight sergeant is a rank used by the East Coast chapter, denoting a position below knight captain. The rank gives command of one or two squads of knights, as well as the command of a base or outpost like the GNR building plaza,

Experienced knights may be promoted to a position of seniority, overseeing the activities of their juniors.

This rank is typically referred to as just Knight

Knights are responsible for manufacturing and repairing the weapons and other pieces of technology. After many years of service and experience, the best knights are promoted to paladins, the pinnacle of the Brotherhood military.[Non-game 3] The next rank is senior knight, and finally, the leader of the order is the head knight.

In the East Coast chapter, "knight" is a strictly military rank and the scribes are the ones responsible for manufacturing technology there.

The rank of aspirant was created by the East Coast Chapter of the Brotherhood some time between 2277 and 2287, denoting an initiate who has entered training under a superior officer, such as a paladin or knight-commander, in order to be promoted to a full-fledged knight.

By 2277, the East Coast chapter of the Brotherhood has adopted the rank of squire as a title for children who have been born into, or been recruited by the Brotherhood, making it the lowest rank in the chapter. These children are not permitted to take part in combat. Instead, they perform errands and menial labor for the Brotherhood's military and are provided with training and education in return. They also appear to be heavily conditioned by propaganda, with those aboard the Prydwen claiming not to fear death and possessing an almost religious devotion to the Brotherhood. Upon reaching adulthood, squires become initiates and begin active duty.

Squires are occasionally taken out as observers on a sweep and clean mission led by high ranking members of the Brotherhood. Lancer Captain Kells bestows such a responsibility upon the Sole Survivor in the radiant quest Leading by Example. The squire that accompanies the player character does not take part in the fighting and is merely there to observe and study combat techniques.

Senior initiates are initiates who have completed basic training and move on to more advanced training.

Initiate is one of the lowest ranks in the Brotherhood of Steel's rank system. The precise definition of the rank appears to vary between the regional chapters.

The West Coast division uses the term to indicate a mere trainee as having been initiated into the Brotherhood, whereas the other two reserve that title until the recruit has completed initial training. The most plausible explanation lies in the fact that the West Coast division is significantly more insular than the others; the bulk of its new recruits are the offspring of existing members and only rarely are outsiders accepted into the organization. By contrast, circumstances have forced the other two divisions to actively recruit from among the local population.

The West Coast chapters divide the rank into "buck" initiate and senior initiate, while the East coast only has a single initiate rank.[16]

In the West Coast division, initiate is the base rank of one who has only just been accepted into the Brotherhood as a trainee. After completing initial training, initiates are promoted to apprentice, like Apprentice Watkins. Apprentices who are at the stage of choosing their career path then becomes a journeyman, but must choose which order of training they wish to receive; either scribe or knight.[17]

Initiates may even be issued power armor if their assignment merits it as in the case of Cabbot outside the Lost Hills Bunker, or the ill-fated Initiate Reddin of the Lyons' Pride. These are uncommon cases however. In some chapters, such as under Arthur Maxson's east coast division, or the Mojave chapter, initiates are never seen wearing power armor and are instead wear Brotherhood fatigues or recon armor.

Scribes are tasked with creating and keeping records of the technology recovered and used by the Brotherhood and experimenting with new weapons and other useful devices to be used in the field by the Knights and Paladins. Scribes rarely leave the safety of the BoS bunkers, but they are sometimes called into the field to examine a piece of technology or perform a task beyond the skills of the Brotherhood soldiers.[Non-game 4] The attitude of many scribes in the Brotherhood can be described as techno-centric. While a great number study history and cultures, the majority of scribes focus their studies on subjects related to the acquisition, repair, or creation of technology.[18][19]

There are three major Scribe orders: Each is headed by a Proctor, designated by the Head Scribe.[20][21]

The proctors oversee and approve of each project that the scribes in their order are working on, and assign the proper scribes to the right projects. Each proctor must report to the head scribe, which assigned them to their respective order, on each project, and to get approval to move ahead with a new project. They often work on their own projects, which are usually completed very quickly because the proctor can prioritize them and assign senior scribes to them.

In Fallout 3, proctors are not actually ranks but rather roles taken on by certain scribes. As of the events of Fallout 4, however, proctors have become a rank of their own, superior to senior scribes.

This rank is typically referred to as just Scribe

Scribes are tasked with creating and keeping records of the technology used by the Brotherhood. The attitude of many scribes in the Brotherhood can be described as techno-centric. While a great number study history and culture, the majority of scribes focus their studies on subjects related to the acquisition, repair, or creation of technology.

These are scribes in training. Serving in the East Coast Brotherhood.

An archivist is a position introduced within the Maxson model. Little is known of their role inside the Brotherhood of Steel other than they can work with and directly report to the elder on matters assigned to them, and have a highly scientific skill set, capable of parsing energy readings and determining the source and possible purpose.

In 2287, the only known archivist was Archivist Knox who identified energy readings from the Commonwealth as originating from the Institute. Elder Maxson reviewed his findings and they both agreed on the possibility of weapon or other device development, and prompted his expedition into the Commonwealth.[22]

The rank of Lancer is the dedicated pilot class of the Brotherhood. Lancers must undergo specialist training to learn how to operate and pilot Vertibirds and Airships. This training covers standard operating and piloting procedures but the real training is for piloting while under heavy fire. The primary role of a Lancer is to provide air support and carry out transport duties for ground forces. While Lancers are trained mainly for air combat, they also receive ground force training and often carry a laser weapon incase of being downed and caught in a firefight. The Lancer rank is entirely unique to Brotherhood of Steel under Arthur Maxson's leadership.[Non-game 5]

Lancer-captains are the highest ranking members of the lancers, being the head of the branch as a whole. Lancer-Captain Kells is the only named member of this rank.

Lancer-sergeants are the officers of the lancer branch.

Lancer-knights are veteran pilots and crewmembers of the Prydwen.

Lancers are fully qualified pilots who have completed their training.

Lancer-initiates are the lowest caste of the lancers. They are however still capable of piloting Vertibirds by themselves.

Not so much a rank, but a designated role for paladins tasked with coordinating assaults.

The following members of the Brotherhood are mentioned by rank. They are listed below by highest rank achieved.

Brotherhood of Steel ranks appear throughout the Fallout series. 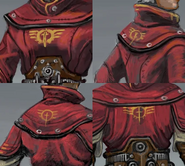 Cite error: <ref> tags exist for a group named "Non-game", but no corresponding <references group="Non-game"/> tag was found, or a closing </ref> is missing