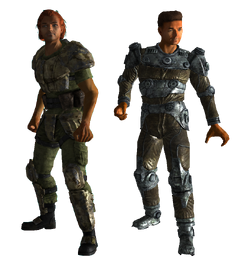 “All of 'em became Initiates. Most of them went on to become Brothers. A lot fell in action. I'm the only survivor of The Scourge of The Pitt still stationed at the Citadel.”— Kodiak, about what happened to the Pitt kids

These Brotherhood of Steel Initiates appear in Fallout 3.

Retrieved from "https://fallout.fandom.com/wiki/Brotherhood_of_Steel_initiate?oldid=2940397"
Community content is available under CC-BY-SA unless otherwise noted.