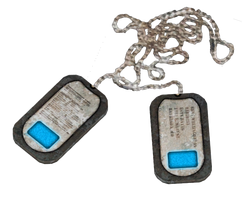 Brotherhood of Steel holotags are a miscellaneous item in Fallout 3 and Fallout: New Vegas.

Every member of the Brotherhood of Steel, just like the soldiers of the U.S. Army that they are descended from, wears a set of two holotags around their neck. They contain essential personal and medical information about the wearer so that their corpse can be identified.

In Fallout: New Vegas, these holotags appear but are not part of any quest. They may be found on the corpses of any member of the Mojave Chapter.

In Fallout 3, holotags recovered from fallen Brotherhood members can be turned in to Scribe Jameson at the Citadel (A-Ring Archives) in exchange for 100 caps and 25 XP each, but only before embarking on the Take it Back! quest. With Broken Steel, this can be continued beyond the Take it Back! quest. Jameson also talks about offering technology from time to time in return but never gives any.

Retrieved from "https://fallout.fandom.com/wiki/Brotherhood_of_Steel_holotag_(Fallout_3)?oldid=2289871"
Community content is available under CC-BY-SA unless otherwise noted.