Brotherhood of Steel holotags are a miscellaneous item in Fallout 3.

Name tags used by the United States Armed Forces and the Brotherhood of Steel. Some variants include information such as the soldier's full name, signature, identification number, blood type, security clearance, expiration date, base of operations, and a slogan You think you can take me? You go right ahead printed below a barcode. Others contain name and address only.[1]

Every member of the Brotherhood of Steel wear a set of two holotags around their neck. They contain essential personal and medical information about the wearer. 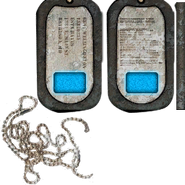